The multi-tenant control plane is run and operated by OpenFaaS Ltd. 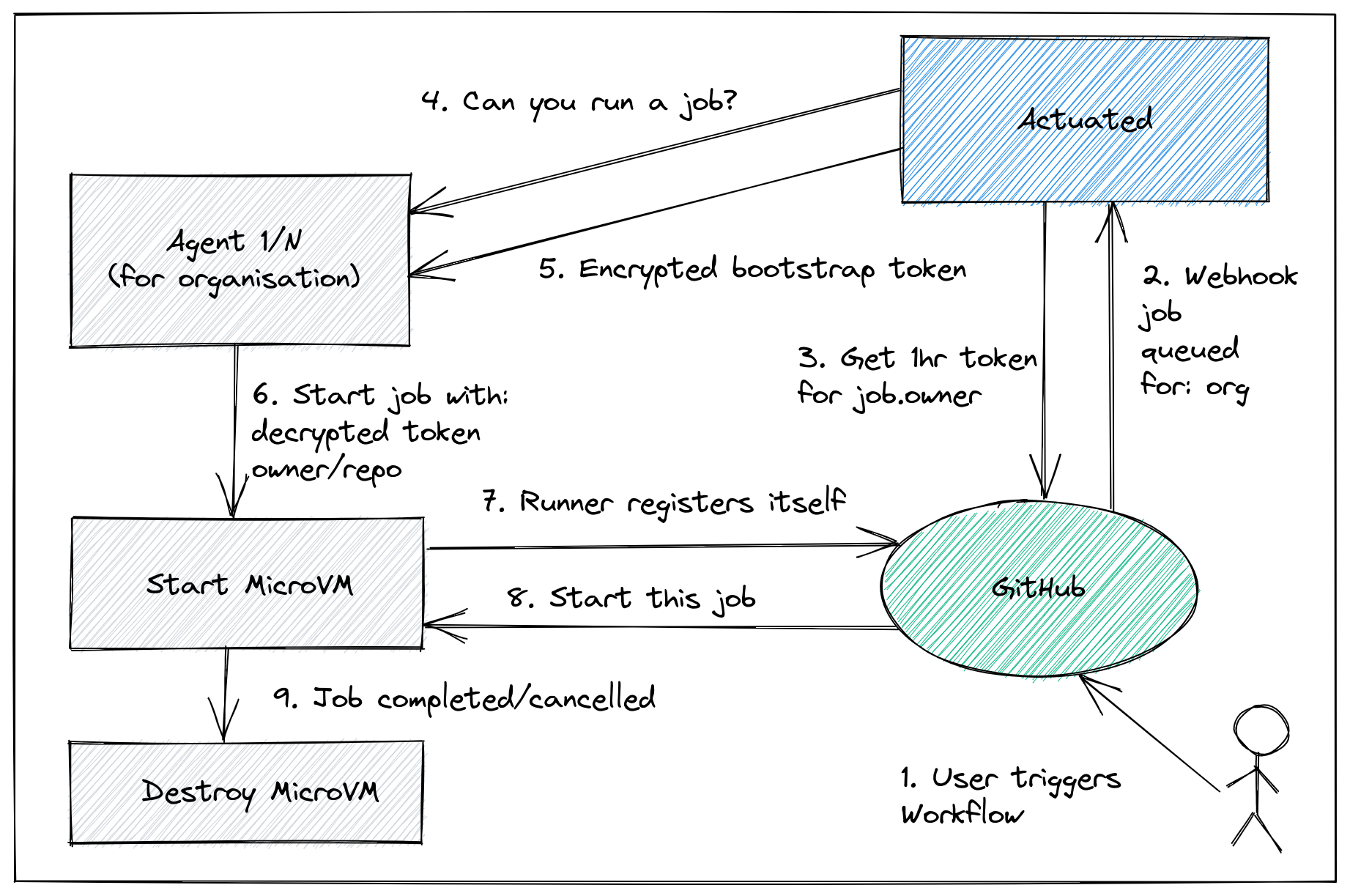 The conceptual overview showing how a MicroVM is requested by the control plane.

MicroVMs are only started when needed, and are registered with GitHub by the official GitHub Actions runner, using a short-lived registration token. The token is been encrypted with the public key of the agent. This ensures no other agent could use the token to bootstrap a token to the wrong organisation.

How does actuated compare to a self-hosted runner?¶

A self-hosted runner is a machine on which you've installed and registered the a GitHub runner.

Quite often these machines suffer from some, if not all of the following issues:

We've heard in user interviews that the final point of dirty state can cause engineers to waste several days of effort chasing down problems.

Actuated uses a one-shot VM that is destroyed immediately after a build is completed.

actuated is primarily for software engineering teams who are currently using GitHub Actions. A GitHub organisation is required for installation, and runners are attached to individual repositories as required, to execute builds.

What kind of machines do I need for the agent?¶

You'll need either: a bare-metal host (your own, AWS i3.metal or Equinix Metal), or a VM that supports nested virtualisation such as those provided by GCP, DigitalOcean and Azure.

For the pilot phase, we're targeting GitHub Actions because it has fine-grained access controls and the ability to schedule exactly one build to a runner. Most other CI systems expect self-hosted runners to perform many builds, and we believe that to be an anti-pattern. We'll offer advice to teams accepted into the pilot who wish to evaluate GitHub Actions or migrate away from another solution.

That said, if you're using these tools within your organisation, and face similar issues or concerns, we'd like to hear from you. And we have a proof of concept that works with GitLab CI, so feel free to reach out to us if you feel actuated would be a good fit for your team.

What kind of access is required to my GitHub Organisation?¶

The actuated GitHub App will request:

Did you know? The actuated service does not need any access to your code or private or public repositories.

Can GitHub's self-hosted runner be used on public repos?¶

The GitHub team recommends only running their self-hosted runners on private repositories.

I took some time to ask one of the engineers on the GitHub Actions team.

With the standard self-hosted runner, a bad actor could compromise the system or install malware leaving side-effects for future builds.

He replied that it's difficult for maintainers to secure their repos and workflows, and that bad actors could compromise a runner host due to the way they run multiple jobs, and are not a fresh environment for each build. It may even be because a bad actor could scan the local network of the runner and attempt to gain access to other systems.

So, can you use actuated on a public repo?

Our contact at GitHub stated that through VM-level isolation and an immutable VM image, the primary concerns is resolved, because there is no way to have state left over or side effects from previous builds.

Actuated fixes the isolation problem, and prevents side-effects between builds. We also have specific iptables rules in the troubleshooting guide which will isolate your runners from the rest of the network.

How many builds does a single actuated VM run?¶

When a VM starts up, it runs the GitHub Actions Runner ephemeral (aka one-shot) mode, so in can run at most one build. After that, the VM will be destroyed.

VMs are placed efficiently across your Actuated Agents using a simple algorithm based upon the amount of RAM reserved for the VM.

Autoscaling of VMs is automatic. Let's say that you had 10 jobs pending, but given the RAM configuration, only enough capacity to run 8 of them? The second two would be queued until capacity one or more of those 8 jobs completed.

If you find yourself regularly getting into a queued state, there are three potential changes to consider:

The plan you select will determine how many Actuated Agents you can run, so consider 1. and 2. before 3.

Do I need to auto-scale the Actuated Agents?¶

If you haven't, read the previous section.

If you feel that is a requirement for your team, set up some time to tell us why and we'll see if we can help.

What do I need to change in my workflows to use actuated?¶

Yes, actuated is built to run on both Intel/AMD and ARM64 hosts, check your subscription plan to see if ARM64 is included. This includes a Raspberry Pi 4B, AWS Graviton, Oracle Cloud ARM instances and potentially any other ARM64 instances which support virtualisation.

What's in the VM image and how is it built?¶

The VM image contains similar software to the hosted runner image: ubuntu-latest offered by GitHub. Unfortunately, GitHub does not publish this image, so we've done our best through user-testing to reconstruct it, including all the Kernel modules required to run Kubernetes and Docker.

The image is built automatically using GitHub Actions and is available on a container registry.

How easy is it to debug a runner?¶

OpenSSH is pre-installed, but it will be inaccessible from your workstation by default.

To connect, you can use an inlets tunnel, Wireguard VPN or Tailscale ephemeral token (remember: Tailscale is not free for your commercial use) to log into any agent.

We also offer a SSH gateway in some of our tiers, tell us if this is important to you in your initial contact, or reach out to us via email if you're already a customer.

Feel free to book a call with us if you'd like to understand this comparison in more detail.

Builds on public GitHub repositories are free with the standard hosted runners, however private repositories require billing information, after the initial included minutes are consumed.

You can only get VM-level isolation from either GitHub hosted runners or Actuated. Standard self-hosted runners have no isolation between builds and actions-runtime-controller requires either a Docker socket to be mounted or Docker In Docker (a privileged container) to build and run containers.

Its primary use-case is scale GitHub's self-hosted actions runner using Pods in a Kubernetes cluster. ARC is self-hosted software which means its setup and operation are complex, requiring you to create an properly configure a GitHub App along with its keys. For actuated, you only need to run a single binary on each of your runner hosts and send us an encrypted bootstrap token.

If you're running npm install or maven, then this may be a suitable isolation boundary for you.

The default mode for ARC is a reuseable runner, which can run many jobs, and each job could leave side-effects or poison the runner for future job runs.

If you need to build a container, in a container, on a Kubernetes node offers little isolation or security boundary.

What if ARC is configured to use "rootless" containers? With a rootless container, you lose access to "root" and sudo, both of which are essential in any kind of CI job. Actuated users get full access to root, and can run docker build without any tricks or losing access to sudo. That's the same experience you get from a hosted runner by GitHub, but it's faster because it's on your own hardware.

You can even run minikube, KinD, K3s and OpenShift with actuated without any changes.

ARC runs a container, so that should work on any machine with a modern Kernel, however actuated runs a VM, in order to provide proper isolation.

That means ARC runners can run pretty much anywhere, but actuated runners need to be on a bare-metal machine, or a VM that supports nested virtualisation.

See also: Where can I run my agents?

Doesn't Kaniko fix all this for ARC?¶

Kaniko, by Google is an open source project for building containers. It's usually run as a container itself, and usually will require root privileges in order to mount the various filesystems layers required.

See also: Root user inside a container is root on the host

If you're an ARC user and for various reasons, cannot migrate away to a more secure solution like actuated, Kaniko may be a step in the right direction. Google Cloud users could also create a dedicated node pool with gVisor enabled, for some additional isolation.

However, it can only build containers, and still requires root, and itself is often run in Docker, so we're getting back to the same problems that actuated set out to solve.

In addition, Kaniko cannot and will not help you to run that container that you've just built to validate it to run end to end tests, neither can it run a KinD cluster, or a Minikube cluster.

Let's say that you wanted to access a single ARM64 runner to speed up your ARM builds from 33 minutes to < 2 minutes like in this example.

The two cheapest options for ARM64 hardware would be:

In both cases, we're not talking about a significant amount of money, however we are sometimes asked about whether actuated agents need to be running 24/7.

The answer if that it's a trade-off between cost and convenience. We recommend running them continually, however you can turn them off when you're not using them if you think it is worth your time to do so.

If you only needed to run ARM builds from 9-5pm, you could absolutely delete the VM and re-create it with a cron job, just make sure you restore the required files from the original registration of the agent. Feel free to reach out to us if you need help with this.

We are currently exploring dedicating a GPU to a build. So if an actuated host had 4x GPUs, you could run 4x GPU-based builds on that host at once, each with one GPU, or two jobs with 2x GPUS or one job with 4x GPUs. Let us know if this is something you need when you get in touch with us.

Is Windows or MacOS supported?¶

Linux is the only supported platform for actuated at this time on a AMD64 or ARM64 architecture. We may consider other operating systems in the future, feel free to reach out to us.

Is Actuated free and open-source?¶

Actuated is a commercial B2B product and service created and run by OpenFaaS Ltd. Customers require an active subscription to use the actuated.

The website and documentation are available on GitHub and we plan to release some open source tools in the future for customers around agent bootstrapping and autoscaling.

Is there a risk that we could get "locked-in" to actuated?¶

No, you can move back to either hosted runners (pay per minute from GitHub) or self-managed self-hosted runners at any time. Bear in mind that actuated solves for a certain set of issues with both of those approaches.

Why is the brand called "actuated" and "selfactuated"?¶

The name of the software is actuated, in some places "actuated" is not available, and we liked "selfactuated" more than "actuatedhq" or "actuatedio" because it refers to the hybrid experience of self-hosted runners.

The SaaS collects and stores:

The following is collected from agents:

In addition, for support incidents only, we may need to collect the logs of the actuated agent process remotely from:

This information is required to operate the SaaS including scheduling of VMs and for technical support.

Traffic between the SaaS and agents is over HTTPS only with TLS encryption and unique API tokens.